In traditional body-art, designs are adjusted to the body as they are applied, enabling creative improvisation and exploration. Conventional design and fabrication methods of epidermal interfaces, however, separate these steps. With BodyStylus we present the first computer-assisted approach for on-body design and fabrication of epidermal interfaces. Inspired by traditional techniques, we propose a hand-held tool that augments freehand inking with digital support: projected in-situ guidance assists creating valid on-body circuits and aesthetic ornaments that align with the human bodyscape, while pro-active switching between inking and non-inking creates error preventing constraints. We contribute BodyStylus’s design rationale and interaction concept along with an interactive prototype that uses self-sintering conductive ink. Results of two focus group explorations showed that guidance was more appreciated by artists, while constraints appeared more useful to engineers, and that working on the body inspired critical reflection on the relationship between bodyscape, interaction, and designs.

Epidermal Devices Bodystylus is a novel design tool that supports designers of epidermal devices to design directly on the user body. It enables guidance and constraints at various levels depending on the designer's knowledge and skills, thus adapts to multiple user expertises.

On-Body Design to Appreciate its Complex Geometry Designing on the body enables to appreciate its complex geometry: the designer can take into account the body's curvature and bone structure to adapt the design in real time. Furthermore, designers can assess their design within the context of the user's body and rapidly iterate over different variants.

Building on Rich Traditions of Body Craft
Permanent tattooing and henna markings have a long and complex history. Contemporary body markings include permanent tattoos of various styles, various forms of the non-permanent face and body paint, e.g., cosmetics, stage or carnival make-up, as well as semi-permanent drawn-on skin embellishments from plant-based dyes, e.g., henna or jagua. BodyStylus builds upon these rich traditions of elaborating a design on the body by enabling the user to generate circuits using a pen on skin. Thereby, the process of fabricating on-body interfaces becomes more immediate and less detached from the body than CAD-based approaches. In its aesthetic, BodyStylus strongly draws on the intricate line art of henna, which, with its crisp lines and entwined ornaments is well suited for implementing electrical circuits. 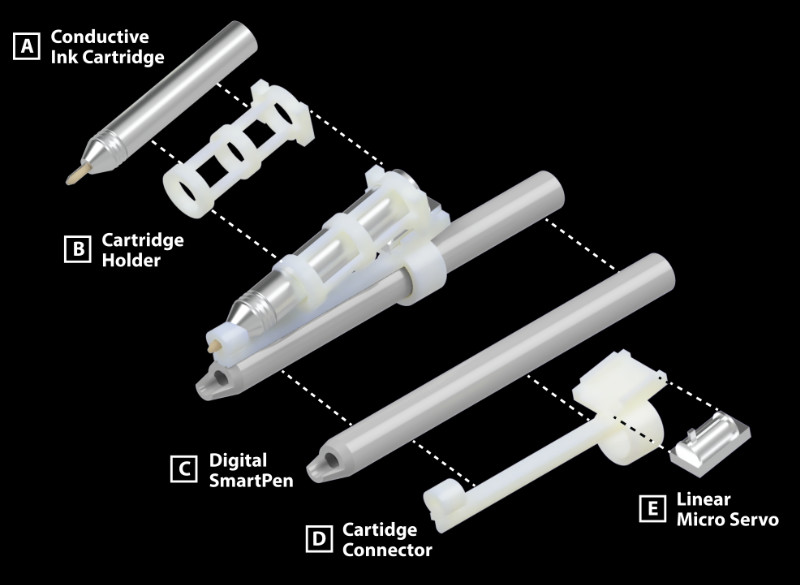 Position-Aware Handheld Pen Using Conductive Ink Cartridges
BodyStylus uses a position-aware handheld pen that can proactively switch between different modes - inking and non-inking – and that supports the fabrication of both conductive and non-conductive traces. The choice of a handheld inking device builds upon tools used in traditional body art. It allows for rich practices of designing and fabricating on and with the body, individually or collaboratively as a social activity. We leverage a Neo SmartPen M1 that relies on printed patterns attached to the skin with tattoo paper for tracking the pen's position. To guide the designer's movements, our prototype uses a ceiling-mounted projector (Sony VPL-HW50ES) for a stationary setup. A portable projector (DELL M115HD) is used for displaying guides on body locations that cannot receive projections well from the ceiling, such as the upper arm or shoulder.

Application Cases Realized with BodyStylus. A decorative anklet with a blinking LED (left), a wristband slider control that comprises three segments to control the color of an LED (middle), an interactive hand decoration that turns on and off an LED by bending the wrist.