Today’s typical input device is fat, rigid and made of glass. However, advances in sensing technology and interaction design suggest thinking about input on other surface, including soft materials. While touching rigid and soft materials might feel similar, they clearly feel diferent when pressure is applied to them. Yet, to date, studies only investigated force input on rigid surfaces. In this project, we investigated the effects of compliance on force input. For visual targeting tasks and three levels of softness, the results of a user study indicate that high force levels appear more demanding for soft surfaces, but that performance is otherwise similar. We observed higher performance than previously reported in the research literature, hence suggesting force input has been underestimated. We infer implications for the design of force input on soft surfaces and conclude that interaction models used on rigid surfaces might be used on soft surfaces.

Force input as an expressive interaction means We focus on force input as it is an interesting complement to conventional touch interactions on small and constrained surfaces. Such an input has been evaluated in the HCI for years, but our results show it has been underestimated. We show examples of use cases force input enables for ubiquitous computing, like interacting on the skin.

Psychophysical evaluation trough a user study Our work gets inspiration from studies in psychophysics that investigate natural phenomenas through the perceptual lens. In our context, we focus on the phenomenon related to surface deformation and target performance while controlling the force applied on a surface. These initial results provide a starting point for other studies investigating soft surfaces in HCI.

Investigating Force Input on Soft Surfaces
If merely touched, rigid and soft surfaces feel similar. However, soft surfaces deform under the pressure of the user’s finger (see images below), which provides additional sensory cues by stimulating tactile and kinesthetic receptors. Several studies showed that we perceive the compliance1 of a surface mostly through deformations because the surface wraps around the fingertip and induces more tactile innervation. It is therefore reasonable to assume that these additional sensory cues provided by soft materials have an effect on the user performance while interacting with force input.

The three surfaces (silicone samples) used in our study. A pressure sensor is located between the fingertip and the surface. In this example, the user applies a force of 10N on each surface.

The Surface Deformability Affects the Sensor Response Curve
We use a Force Sensing Resistor (FSR) in our study to sense the force applied on the surface. We place this FSR on top of the surface. As these sensors are sensitive to deformation, we compute its response curve by applying various weight on them repeatedly, for each surface. The results are shown on the right-hand image. These results exhibit significant differences in the response curves. We use the models inferred to linearize the output of the sensor during our study to provide users with a linear visual mapping. 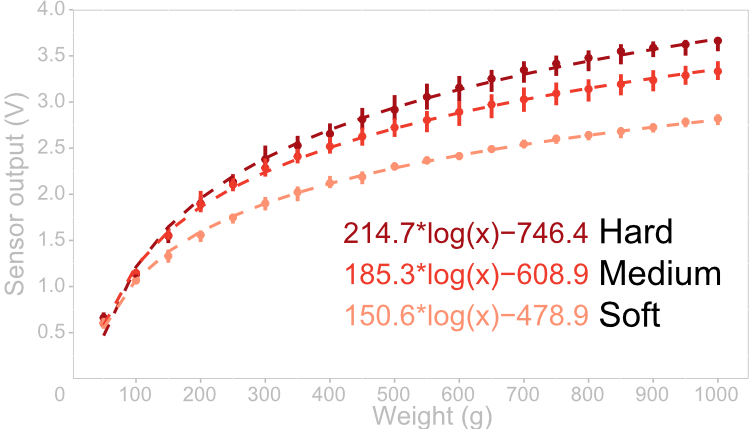 Conventional Targeting Task
We build on a conventional targeting task to assess user performance while controlling force applied on soft surfaces. The user controls a slider by applying more or less force on the surface, and must place the slider next to a given cell of a force scale (see right-hand image). To control the difficulty, we propose three different scales with various cell heights. We identify the target force levels by crossing the scales with target values (see right-hand image). To select a force level, we leverage a quick release mechanism: once the force level is on the right cell, the user can release quickly the force applied on the surface. The system then infers the force level selected based on timings informed by the literature. 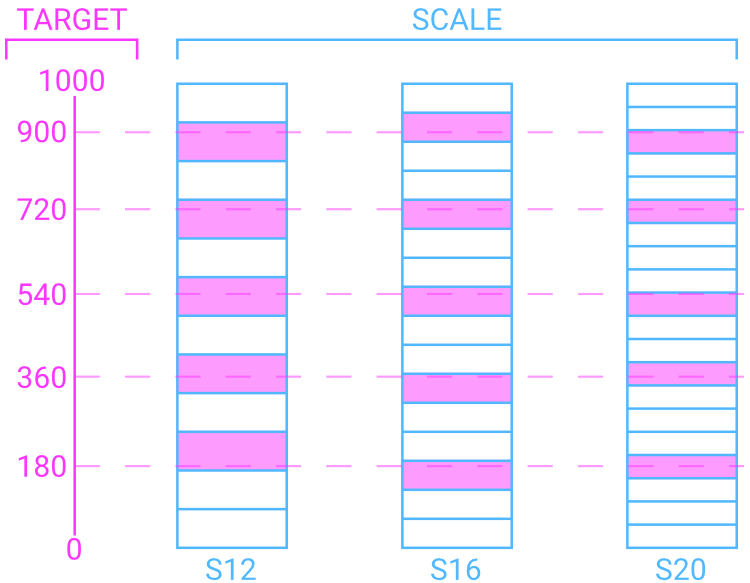 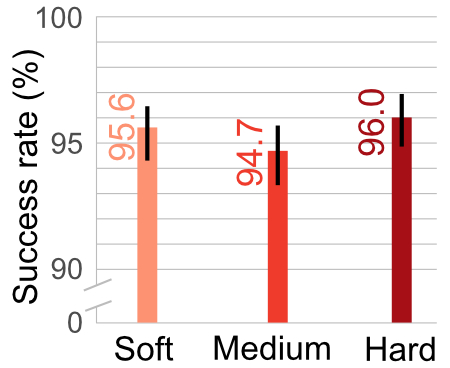 User Performance: Accuracy and Selection Time
We evaluate the accuracy and interaction time as two major measures of the user performance. Using visual estimation techniques (see the paper for more details), we do not find evidence of a difference in terms of accuracy between the surfaces (see left-hand image). We observe, however, high accuracy rates for all scales (~95%) which highlights a discrepancy with results reported in literature. We perform a systematic comparison with the literature (see Table 1 in the paper) and show that force input has been underestimated. Looking at the selection times, we observe a difference between the soft surface and the others (~200ms). We investigate this more by looking at the number of crossings below. 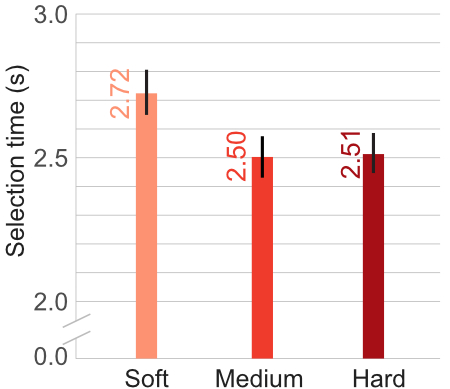 Design Implications and Use Cases
When designing interfaces on arbitrary surfaces, the input method is typically spatial. Systems which use force input are comparatively rare. This is unfortunate as force input is a compelling means to provide subtle input requiring minimal movements in a wide variety of contexts. For instance, one could interact on the cheek or sleeve to control AR goggles and input text using force, interact on the armchair of an augmented sofa to control a TV, or leverage force input in the context of thumb-to-finger interactions (see image below). One explanation of why this is seldom done is because the throughput is relatively low. Our study results suggest that this general consensus might be wrong, and that carefully implemented force input devices provide a much higher input fidelity than is generally assumed in the HCI community.