Side-Crossing Menus (SCM), is a gestural technique enabling large sets of gestures on a smartwatch. It relies on position-dependent gestures that build on bezel and crossing gestures to maximize the input capacity of small interactive surfaces. In contrast with conventional gestural techniques, SCM relies on broad and shallow menus that favor small and rapid gestures. The large gesture sets supported by SCM allow users to interact remotely with complex environments such as smart homes, large remote displays, or virtual reality environments, and switching between them (e.g., AR setup in a smart home). Furthermore, it supports eyes-free interactions by augmenting the bezels of the watch with simple tactile aids to avoid disrupting the user’s visual attention.

Optimizing the input capacity of small surfaces Small interactive surfaces restrict conventional pointing interactions. With SCM, we demonstrate that gestural interactions is beneficial in this context as it supports large sets of commands. Moreover, it supports eyes-free interactions by augmenting the bezel of a smartwatch with simple tactile aids.

Path-free gestures leveraging shallow menus While most gestural interactions rely on deep menu hierarchies (few items per level, but several levels), we designed SCM to favor shallow menus (many items per level, but few levels). Thus, SCM is a great alternative to convenetional techniques like the Marking menus. Moreover, SCM gestures do not depend on a given path, but rather a starting and ending point, leveraging the user freedom.

Controlling IoT devices with a wearable controller Supporting large gesture sets on small devices provide several advantages: one can control a large variety of devices by mapping their controls to SCM gestures, and users have the choice of the subset of gestures they want to use. Using a wearable form-factor is an advantage in this context as users can move freely without carrying encumbering dedicated controllers for each device.

Controlling various devices using a single smartwatch
With a single smartwatch, SCM enables controlling various IoT devices or augmented reality headsets. Using a single controller for controlling various environment allows users to seamlessly swtich between them without the need to hold dedicated controllers for each of them. The underlying principles of SCM rely on recall, i.e., the user recalls the gestures to perform and does not need to see them on a screen to use them. To learn the gestures, SCM provides a visual representation. Since the small size of a smartwatch strongly constrains the information one can display on it, SCM leverages the various displays integrated in these various environments to show the available gestures (i.e., the AR headset's screen, a large display, etc.).

SCM gestural design: position-dependent gestures
The design of SCM gestures relies on a grid layout. An SCM Gesture consists of a stroke from one cell to another by crossing a specific side of the latter (see image below). Three components merely characterize it: the starting cell, the ending cell (different from the starting cell and not necessarily on the border), and the side of the ending cell crossed to enter it. Because they depend on two areas (a starting and an ending cell), these gestures are position-dependent. SCM builds on bezel gestures to facilitate eyes-free interactions and avoid conflicting with common interactions such as pointing and swipe gestures. To distinguish these gestures without actuating the bezels, we make SCM gestures start from the border cells. As several gestures can originate from a unique starting cell, a starting cell corresponds to an SCM menu (e.g., the middle-right starting cell corresponds to the menu "edit" on the image below). To support eyes-free interactions, we complement the design of SCM with passive and active tactile aids. We emboss the watch bezels using paper stickers to indicate the position of starting cells, and use trigger vibrations when the user enters a new cell. 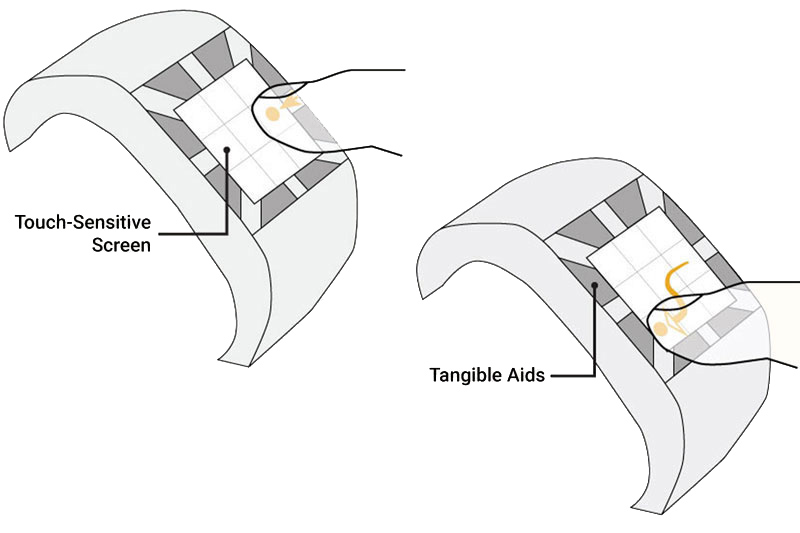 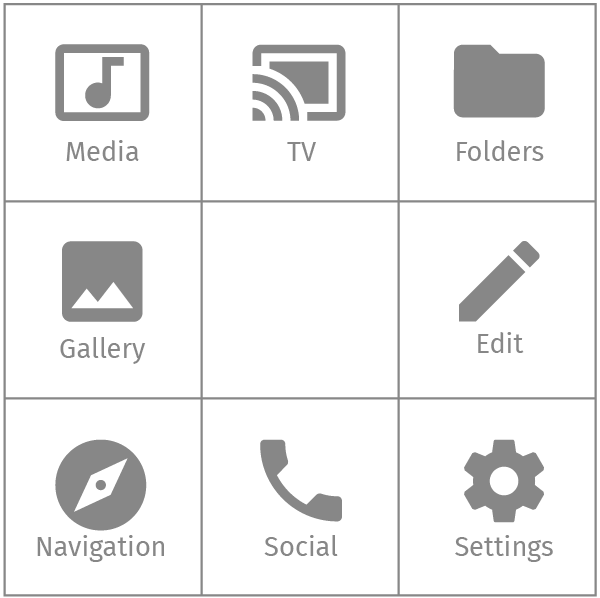 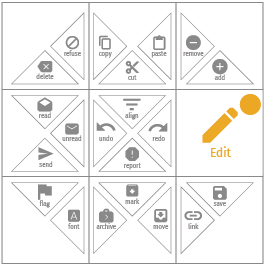 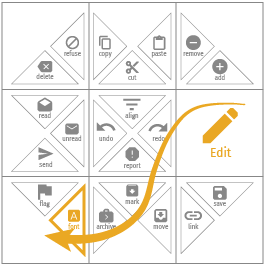 SCM gestures are path-flexible
The SCM design only lightly constrains the path to draw for completing a gesture. All the paths used on the right-hand image correspond to the same gesture. This feature offers several advantages. Users can adopt a strategy to draw a given gesture depending on their preferences or the context, i.e., they might want to go as fast as possible and take the shortest path or rather safely slide along the bezels of the screen. It also allows users to correct gestures that are partially erroneous by changing the trajectory, and use gestures they find easier to memorize. 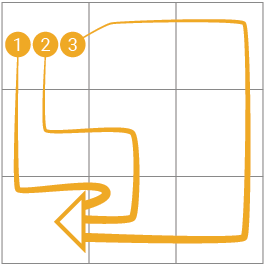 SCM usability and learnability
We ran two experiments to assess first the usability of SCM when performing gestures eyes-free, and its learnability by comparing to a conventional gestural technique (multistroke marking menus). We found untrained users can perform SCM gestures with 95% accuracy after a training of 20 minutes, suggesting SCM is rather easy to master. Moreover, we did not observe significant differences between the various types of SCM gestures evaluated, hinting that users can perform accurately all SCM gestures. The results of our second experiment demonstrate that the participants learned SCM gestures efficiently, and that it provides comparable results to a baseline gestural technique. This indicates that SCM is a valid alternative to deep hierarchical menus, thus offers designers a new solution to lay out commands in gestural menus. More information can be found in the paper.